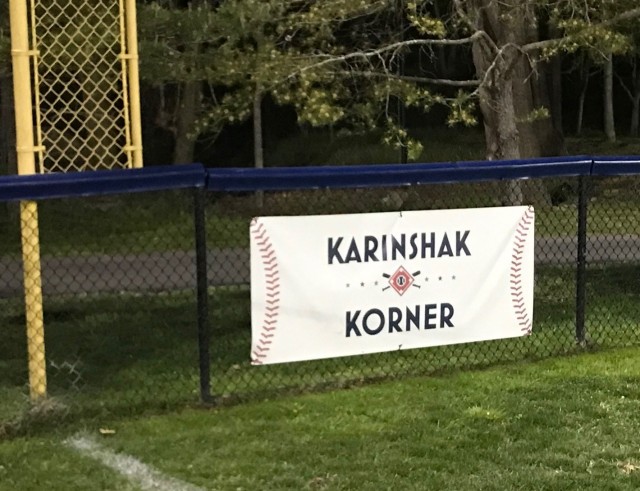 In memory of our long-time coach and friend, John Karinshak, who passed away earlier this year, we have retired the left field corner at our home field Barcroft #2. We hope all players, at some point in their young baseball careers, will have an opportunity to knock one down the 3rd base line, or even over the fence, in Karinshak Korner. Coach Karinshak would have taken great pleasure in that.

John Karinshak began as an ABR volunteer in the early 1990s when his son, George, began playing youth baseball. Notably, John’s volunteerism extended beyond his own son’s participation as a player. He devoted more than 30 years of volunteer service to ABR and youth baseball. John started out coaching alongside ABR’s founding president, Bob “Doc” Bonaccorso, and Doc’s successor, Charlie Binns, helping them mold our league, which started with barely 100 kids and today serves more than 1200 Arlington youth. In addition to coaching teams, John spent many a winter weekend manning a player registration table at Ballston Mall before on-line registration became ubiquitous and sweated for hours upon hours managing equipment in our longtime storage room near Four Mile Run. More recently, John coached recreational teams with his good friend and longtime ABR volunteer Jimmy Miller, along with George, now a veteran ABR coach himself. In fact, Jimmy and George still coach together and will be joined on the diamond this season by a former player of John’s. “Coach Karinshak” is the ultimate legacy coach—the influence over his fellow coaches and players is evident from their continued service to ABR and youth baseball.

Arlington County has had no more exemplary community member than John Karinshak. In addition to his ABR volunteerism, John volunteered countless hours to youth-focused organizations, including the Optimist Club of Arlington, Arlington Host Lions, the Better Sports Club of Arlington, and others. Notably, he served hundreds if not thousands of families over the years at the annual Optimist Club Christmas tree sale, always reminding customers that their payment was “for the kids,” not just the tree. And he dedicated his career to public service, serving in law enforcement with the FBI and Arlington County Police Department for more than 30 years.

There are no two ways about it—they just don’t make public servants and community members like John Karinshak anymore. We are indebted to him for his service, commitment to our community, and the unwavering integrity and character he exuded throughout his life. We will miss John dearly.

John is survived by his wife of 52 years, Judy, his son, George, and many other family members. More information about John’s legacy can be found here.